Rated 4.00 out of 5 based on 1 customer rating
(1 customer review)
Availability:

*Note: We do not ship our orders to parcel locker

Sony launched the long-awaited Sony Xperia 1 II in May of 2020, three months after the announcement. It hit the markets of Australia with an impact, especially on the camera enthusiast community. The phone includes most of the latest elements, including the chipset, GPU, camera, and more. It will cost you AUD1,749.00 in Australia, or even lower if you are lucky.

Sony Xperia 1 II is a camera-centric device with the latest cutting-edge technologies and a camera developed with Sony´s Alpha camera engineers to deliver exceptionally fast-autofocus on a smartphone.

Sony Xperia 1 II has a dimension of 165.1 x 71.1 x 7.6 mm, which is integrates a sleek design and a slim body. The device has a Hybrid Dual SIM features and supports network up to 5G.

Xperia 1 II is powerful and fast and also comes with IP65/68 water resistance and Corning Gorilla Glass 6® on both sides, making it sturdy as well as beautifully designed.

Sony designed the 181.4 gram Xperia 1 II to match your style. It is beautiful yet strong.

Sony Xperia 1 II x`has an OLED capacitive touchscreen, which supports 1B colors for vibrant color and crispy-details on display. The device has a 6.5 inches display, which is 84.0% screen-to-body ratio. The display system has a 1644 x 3840 pixels resolution with an aspect ratio of 21:9.
The aspect ratio is the best in the Smartphone world, which supports 643 PPI density. The PPI density is the largest for any Android Smartphone. The phone integrates the Corning Gorilla Glass 6 as a defense mechanism.

You can experience unprecedented color accuracy with Creator mode “powered by CineAlta” to bring content to life. The Xperia 1 II has a 10-bit equivalent display (8-bit with 2-bit smoothing) that can display a myriad of colors without banding.

Sony Xperia 1 II operates on an Android 10 with an Octa-core Kryo 585 integrating the Qualcomm SM8250 Snapdragon 865 chipset. Snapdragon 865 is one of the best Snapdragon processors, which runs up to 2.84GHz, according to Qualcomm, and the GPU is supposed to offer 20% faster graphics rendering.

There is an Adreno 650 as the GPU, the latest and best GPU in today’s smartphone. It offers 25% higher performance than the old Adreno 640 in the Snapdragon 855. This makes the Adreno 650 suitable for all demanding 3D games on Android.

The Snapdragon 865 empowers you to game, capture, cross-task, and connect like never thought possible. It offers staggering multi-gigabit speeds and improved performance from a 25% faster CPU and GPU than on the previous model.

It has a 256GB UFS 3.0 8GB RAM that lets you store files and application data without having to delete any of your old files. You will never run out of the space. Even if you do, there is an SD card slot for microSDXC (uses shared SIM slot).

As mentioned earlier, Sony Xperia 1 II is a camera-centric phone that utilizes the latest cutting-edge technologies. The camera developed with Sony´s Alpha camera engineers. The device delivers exceptionally fast autofocus on a smartphone.

No smartphone camera can capture shots like the Sony Xperia 1 II. With up to 20 fps continuous burst shooting5, complete with autofocus and auto exposure, you can capture hundreds of moments in seconds. 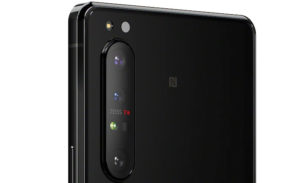 The Quad-camera system is beautifully integrated on the back of the device just below the LED flash. It has a 12 MP wide-angle Dual Pixel PDAF, OIS camera, a 12 MP ultra-wide-angle camera, a 12 MP telephoto with 3x optical zoom, OIS, and a 0.3 MP, TOF 3D, (depth-sensor).
For true creative freedom, the Xperia 1 II has three lenses in versatile focal lengths: 16mm, 24mm, and 70mm. The optics are high-class ZEISS quality for creative shots as intended.

Now you can hear the music as it was meant to be heard. Sony engineered Xperia 1 II to deliver a truly authentic listening experience. The audio tuned in collaboration with Sony Music Entertainment provides users with an immersive experience.

You can immerse yourself in sound all around you. As real as if you are there at a live concert or with the artist recording in a studio. With 360 Reality Audio15, music has never been so immersive and so real.

Sony Xperia 1 II was designed for 360 Reality Audio with unique hardware decoding to optimize sound quality when listening to music on TIDAL. TIDAL is a global music streaming and entertainment platform with over 60 million songs and more than 250,000 videos from your favorite artists.

Sony Xperia 1 II placed the stereo speakers in the at the front of the phone, for powerful, balanced true stereo sound. There is a 3.5 mm audio jack port for connecting the external speakers to the phone.

Battery care keeps your phone from overcharging, while Xperia Adaptive Charging monitors your phone as it charges, to make sure the battery isn’t overworked.